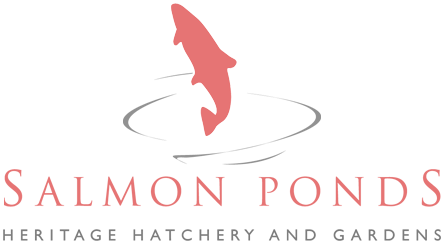 At the Salmon Ponds you can view Rainbow, Albino, Brown, Brook and Tiger Trout, plus Atlantic Salmon. They can weigh up to 8 kilograms.

The Brown Trout was introduced to Tasmania from Europe in 1864 and is now in good numbers in most lakes and rivers, all of which have self-sustaining populations. The largest recorded Brown Trout was a 13.27kg monster, caught in the Huon River in 1887. Brown Trout vary considerably in colour depending on whether they are found in rivers, lakes or sea-run.

Rainbow Trout are considered by many anglers to be the best sporting fish in Tasmania, but they have not adapted in the wild as well as the Brown Trout. This species was introduced from North America in 1898. The Tasmanian record Rainbow Trout is 7.8kg caught in the Ouse River in 1933. Rainbow Trout usually have a dark olive green back and silvery white ventral surface, with a pink to red flash along the side.

Brook Trout are very attractive fish with dark olive-green to brown back, sides and dorsal fin with light worm-like markings and a white stripe along the leading edge of fins. Although introduced to Tasmania in 1883, Brown Trout haven’t acclimatised well – Clarence Lagoon and Lake Plimsoll have wild populations with specimens up to 4kg.

Atlantic Salmon in sea-cage farms are the backbone of Tasmania’s aquaculture industry, and some large mature fish can be seen and fed at the Salmon Ponds. Unsuccessful attempts were made to introduce them to Tasmania’s lakes and rivers. Once a year, two lakes have been stocked with large fish, and many are caught in Southern waterways following their escape from farms.

These golden coloured Albino Rainbow Trout are rare in the wild, but our pond has some fine species. They are popular with visitors because they are easily seen in the pond.

These trout are produced at the Salmon Ponds Hatchery as a display fish and novelty species by crossing female Brown Trout (eggs) with male Brook Trout (milt). They are occasionally released into a few waters, e.g. the Pet Dam, Lake Dulverton and Pawleena Lagoon. This hybrid fish is sterile, so does not breed. They have a green mottled back with distinctive tiger like bands but are otherwise similar in shape and features to Brown Trout.

Feeding the fish at the Salmon Ponds is fun activity for visitors of all ages. There are $2-coin-operated fish food dispensers near the main gate and these dispense pellets that provide the appropriate nutrition to keep the fish happy and healthy. The fish are certainly enthusiastic eaters and throwing the pellets into the ponds creates quite the flurry of activity!

The grounds at the Salmon Ponds feature large ponds brimming with different species of fish up to 8 kilograms, including Rainbow, Brown, Brook, Tiger and Albino Trout and Atlantic Salmon.

Whilst we encourage our visitors to feed the fish, there are times between December and February when periods of hot weather and low water flows prevent visitors from feeding the fish. The combination of low water flows and high water temperatures can impact on the welfare of the fish that are on display and fish stop actively feeding due to the warmer water. An excess of fish food in the water promotes weed growth and reduces oxygen levels, which can result in increased fish mortalities. For these reasons the Inland Fisheries Service may temporarily decommission the fish food dispensers to maintain the well-being of the fish.

Trout fishing for people with disabilities

Special fishing platforms have been installed over the Plenty River, accessible by wheelchair from the riverside walk. The Plenty River is reserved for angling by people with disabilities.